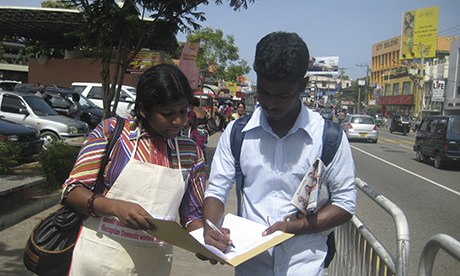 With mounting pressure for a boycott of the Commonwealth heads of government meeting in Colombo this month, there has been media focus on allegations of war crimes and human rights abuses committed by the Sri Lankan government.

But away from the headlines, the country's Domestic Workers Union (DWU) has been highlighting a more mundane, but important, violation. This month, the union will present the labour department with its third draft of the regulation of domestic employees bill. The DWU wants the government to introduce the first comprehensive employment protection to domestic workers, who are predominantly from the Tamil minority.

There is long history of domestic work in Sri Lanka. These men and women are a part of a vulnerable and informal sector of employment, steeped in long-standing inequalities of race, caste and class. The country has no official statistics on the number of domestic workers and they have few legal safeguards or employment rights.

Although a vital part of the economy, domestic work does not contribute to the gross national product. But all of this could change if the union is successful in its lobbying for the bill, which includes a campaign launched in June that has collected more than 7,000 signatures.

This challenge by the DWU is part of an emerging international movement to bring domestic work out of the economic and moral shadows and into a human rights framework.

This week, the inaugural meeting of the International Domestic Workers Federation was held in Montevideo, Uruguay. The congress saw the launch of the Claiming Rights report, which seeks reform of national labour laws and more widespread ratification of the domestic workers convention of 2011. Sri Lanka is one of the countries that has not signed up to the convention.

The DWU is also breaking new ground in its organisational structures. Led by women, all leadership roles are hybridised, shared by an activist and a domestic worker, with the ultimate goal of empowering the workers to run the union themselves.

The activist leader of the DWU, Subramaniyam Anandi is a part of the Red Flag Women's Movement established by the feminist activist Menaha Kandasamy. When the women first met in 2005, Subramaniyam was 19 and unemployed. She was so lacking in confidence that her mother had to do all the talking for her during the interview.

Today Anandi, and her domestic worker counterpart Sarasagopal Sathiyawani, are adept public speakers and passionate in the belief that unionisation is the only way to end centuries of servitude. One of the early victories of the DWU was to shift attitudes by refusing to use the colloquial term velaikaari, or servant.

For Kandasamy, the unionisation of this workforce symbolises a significant cultural advance. Domestic work is based on feudal caste systems, further augmented by the plantation economy in which Tamil workers were brought to the island from South India during British rule in the eighteenth century.

Kandasamy, the daughter of a plantation worker and a trade unionist, is the former president – now general secretary – of the Ceylon Plantation Workers Union, one of the most powerful plantation unions on the island. During her term in office, she set up literacy and leadership training programmes and introduced policies to ensure women comprised 50% of delegates on estate committees.

"The plantations are wombs of inequality and domestic work," says Kandasamy. She points to the high rates of illiteracy and limited economic alternatives available to the largely Tamil workforce, who she estimates comprise more than 90% of domestic workers. A survey of 50 domestic workers by the Red Flag union in 2007 found low levels of education, with an average of five years of primary level schooling.

Through their campaigning work, the DWU has been uncovering the extent of physical, psychological and sexual abuse in the sector, to which live-in workers are the most vulnerable. For many of these employees, standard working conditions are meaningless. There are long working hours, no rest days and little privacy.

The DWU survey found that many live-in workers were confined to certain parts of the home, and most often slept on the kitchen floor. This room was also the primary site of sexual violence.

This everyday segregation and abuse is part of a deeper, symbolic violence in which the domestic worker is a ghostly presence in the household and national psyche. A constitutive element of this type of role is that the employee and her work should remain out of sight. For the DWU it is more important than ever, at this time of escalating repression in Sri Lanka, that the rights of the most vulnerable are made visible and defended.

The British prime minister, David Cameron, and foreign secretary, William Hague, are likely to ignore advice to boycott the Commonwealth summit, despite growing evidence of Sri Lanka's failure to uphold basic human rights. When the pair, other Commonwealth leaders and the world's media partake of the renowned hospitality of their Sri Lankan hosts, they would do well to consider just what this hospitality entails.

Yasmin Gunaratnam is a senior lecturer at Goldsmiths, University of London

Our editors' picks for the day's top news and commentary delivered to your inbox each morning.

Send to a friend

Short link for this page: http://gu.com/p/3k5tq

More from Modern-day slavery in focus on

More from Modern-day slavery in focus

This website is supported, in part, by Humanity United. It is editorially independent and its purpose is to focus on modern-day slavery